Happy Wednesday, everybody! Welcome to my first What I Ate Wednesday (WIAW) post!

Because I love Erica’s WIAW posts so much on her blog, For the Sake of Cake, I’ve decided to join in the fun of the Peas and Crayons link-up, too! (I’ve become a huge fan of link-ups — what a great way to meet other bloggers!)

Every Wednesday morning, I will share everything that I ate the day before, so you can peek into my (new and improved) eating habits.

Thank you for hosting, Jenn! (Make sure you visit her blog. She has so many awesome recipes there, including this incredible-looking one for Shrimp and Veggie Pesto Pasta that I will be trying!) 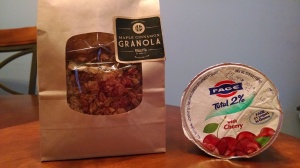 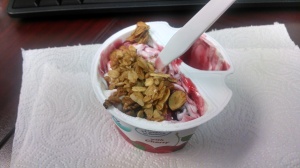 It took some convincing to get me to try Greek yogurt, but I’ve come to enjoy it. I still need to get it with flavoring, though — I haven’t gotten brave enough yet to eat it plain or with my own added fruit. I like Chobani, because they have a greater variety of flavors (at least at Wegmans, where I shop), but I’ve come to prefer Fage. My favorite Fage flavor is cherry, followed closely by peach.

As for the granola, I’m completely obsessed with it! It is homemade by the Paisley Fig and distributed by Room 11, a restaurant and bar located in Northwest D.C. The cinnamon maple flavor is phenomenal, and the mixture contains whole pecans and slivered almonds. 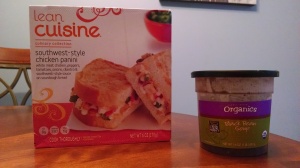 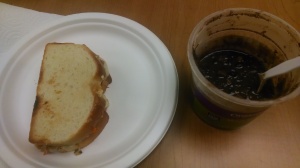 I’ve been trying to limit my consumption of frozen meals, but I really do love these Lean Cuisine Paninis. This is the first time that I had the southwest chicken variety, and it was pretty good. I think my favorite is still the Philly-style steak sandwich, though.

As for the soup… Before we got married and I had my own apartment, I lived right around the corner from Harris Teeter, a North Carolina-based grocery store chain, and became a huge fan. Their prepared foods, especially their soups, are particularly good.

I have to be a bit more strategic about getting to Harris Teeter now that I’ve moved, but I still make special trips. I recently discovered the Organic Black Bean soup, and it’s fantastic. It is full of fiber and protein and is very low in fat. Unfortunately, though, like most soups, it has quite a bit of sodium.

Raspberries have become a standard morning or afternoon snack for me! 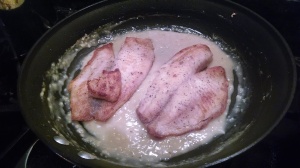 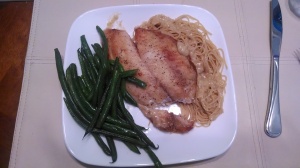 Tonight, I met one of my goals for the week and tried a new recipe!

I found this tilapia recipe in the April issue of Cooking Light, and it was really good. I only made half as much fish as the recipe called for but kept the same amount of sauce. (You can never have enough sauce!) However, because I didn’t use as much flour in the first part of the recipe (to coat and saute the fish), I had too much leftover for the second part of the recipe (to make the sauce), and the sauce got a little too thick. The flavor was still on point, though.

I even branched out and used whole wheat pasta tonight. I wasn’t wild about several varieties of whole grain pasta when I tried them before, but I really didn’t even notice that this angel hair was whole grain.

And there you have it — a full day of eats for Tuesday, March 25, 2014! I stayed within my calorie target for the day and was very close to the recommended proportion of calories from fat, carbs, and protein. All-in-all, a great day of deliciousness!

Do you have a go-to breakfast?  Greek yogurt is definitely a weekday staple for me!

Have you ever had a recipe turn out not exactly right but still taste okay?  I will definitely make this tilapia recipe again but just use a little less flour.